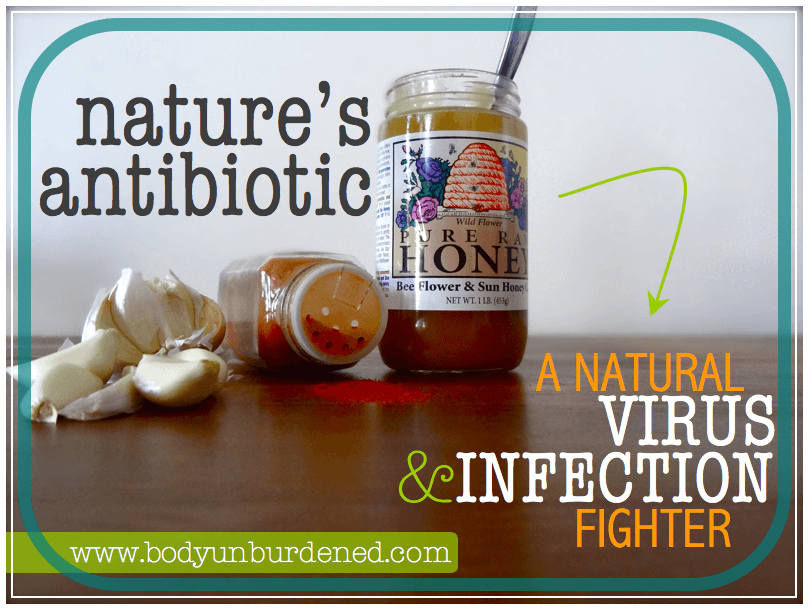 Last week I got a case of the sniffles.

So I took some shots… of ACV followed by a large mug of echinacea tea loaded with cinnamon, ginger, and raw honey three times a day.

This is how I typically cure a cold naturally and quickly, often within a couple of days. So by day four I knew I had a bigger problem: I had a sinus infection.

I’m no noob to sinus infections. I got them a lot when I was younger and I took some very heavy antibiotics to wipe them out. In fact, my junior year of college, I was becoming immune to the strongest antibiotic prescribed. This, ladies and gentlemen, is not good (but antibiotic resistance is a topic for another day).

If only I had known then what I know now…

That there is a super-duper effective, all-natural antibiotic that you can whip up in your kitchen. It can help battle the flu as well as common internal infections.

My sister tried this recipe when she got mastitis a few months ago. It worked extremely well for her, so when I started feeling the heavy pressure in my sinuses I gave her a call to get the low-down on nature’s antibiotic.

Garlic has a *potent* history (heh). According to the NYU Langone Medical Center,

From Roman antiquity through World War I, garlic poultices were used to prevent wound infections. The famous microbiologist Louis Pasteur performed some of the original work showing that garlic could kill bacteria. In 1916, the British government issued a general plea for the public to supply it with garlic in order to meet wartime needs. Garlic was called Russian penicillin during World War II because, after running out of antibiotics, the Russian government turned to this ancient treatment for its soldiers.

Fresh crushed garlic is the star of nature’s antibiotic, and the “fresh” part here is very important. Minced garlic in a jar will not do. When fresh garlic is crushed, a chemical reaction that causes sulfenic acid is set off. But sulfenic acid is unstable and breaks down steadily into another unstable compound called allicin, which has a strong antibiotic property. Let the fresh minced or crushed garlic sit for about 15 minutes before using it in order to build up a greater amount of allicin (which is what we want here). Cayenne pepper is a very powerful spice that, like garlic, has been used for its health benefits throughout history.

According to Dr. Patrick Quillin, Author of The Healing Power of Cayenne Pepper,

Cayenne pepper – prized for thousands of years for its healing power. Folklore from around the world recounts amazing results using cayenne pepper in simple healing and in baffling health problems. But cayenne pepper is not just a healer from ancient history. Recent clinical studies have been conducted on many of the old-time health applications for this miracle herb. Again and again, the therapeutic value of cayenne pepper has been medically validated.

The Food and Agricultural Organization of the United Nations states that cayenne pepper fights infection and inflammation, and the University of Maryland Medical Center has reported that the capsaicin in cayenne peppers may offer an effective treatment for ear infections. While, I really do just try to put raw honey in absolutely everything I make, it has a real purpose here.

First things first, it makes the garlic and cayenne go down easier.

But most importantly, raw honey boosts immune function, and has strong anti-viral and anti-fungal properties.

So how does this work exactly?

Combine 1 crushed garlic clove (that has been sitting out for 15 minutes) with one teaspoon raw honey and ½ teaspoon of cayenne pepper, and mix it all together. Take about ¼ of the mixture into your mouth and swallow it down with a sip of warm tea or water. Do this until the mixture is gone.

As you would with a prescribed antibiotic, you should do this 2-3 times daily, and continue for a day or two after the symptoms disappear.

Of course, seek medical attention if your symptoms are not alleviated. Are you drinking flame retardants?

Why microwave popcorn is utterly unhealthy